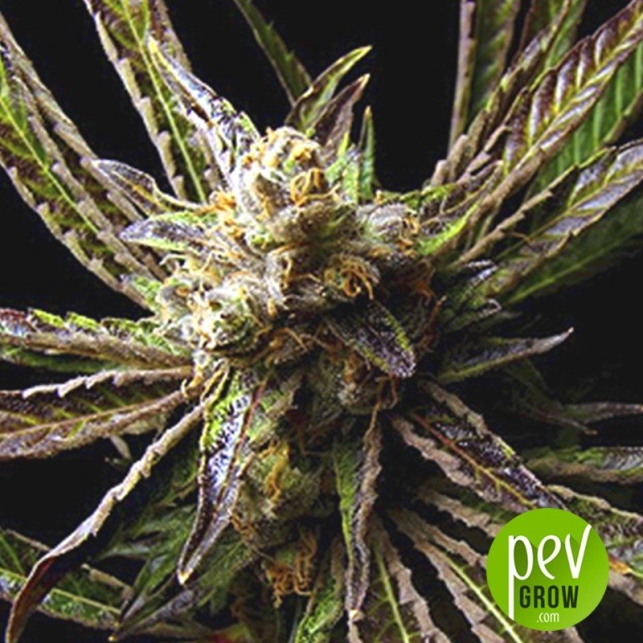 I have the immense pleasure of introducing one of our new and most desired signings, since in PEV Grow we love extreme power varieties. The G-Bomb of Big Buddha Seeds!

Big Bud and an elite clone UK G-Force have taken part in its birth, which have resulted in a variety of marijuana effects very beasts with a production of buds and resin very high.

Structurally the G-Bomb is a 100% Indica variety, which grows vigorously and into a closed pyramid-shaped structure. It enjoys medium internode distance and a remarkable growth rate, as it will be ready for cutting in 8-10 weeks from germination.

Its flavor is very reminiscent of the traditional old school hashish, combined with some fresh lemon touches that are very nice.

What effect does G-Bomb have?

When you smoke the G-Bomb you have to be prepared for a high flying effect. A descent to the most narcotic states of relaxation, perfect for smoking before going to bed and ending the insomnia in one single right hook punch.

In indoor cultivation this is a plant which requires virtually no prior knowledge, as it is very simple to grow. It does not require large doses of food and with just a little the reward is usually more than good productions. You only have to bear in mind that its aroma is strong, so you will have to get a carbon filter and install it in the extraction system, so that the neighbors don’t raiise the alarm. With 9 liter pots you can place up to 11 plants per m2 and I recommend that you place them under the intensity of a 600w HPS spotlight.

In outdoor crops this weed likes to receive good doses of sunlight and shows a spartan resistance to the attack of mold, botrytis and oidium, as well as more humid or rainy climates, so if you live in the north of the country you can grow it, even if the production is reduced a little. In growth, for optimal root development, I like to use Canna Rhizotonic, a powerful root stimulator that will make the vegetative development is greater, as it encourages greater absorption of nutrients.

Productively G-Bomb is a showy one. Indoors you can collect between 300-400 grams per m2, while in outdoor crops the figure reaches even higher heights.

Discover the G-Bomb narcotic: A time bomb about to explode! Can you handle it?

You may also be interested in:
Opinions and doubts about G-Bomb
Leave us your opinion or ask us any questions you have about this seed and participate in the draw!