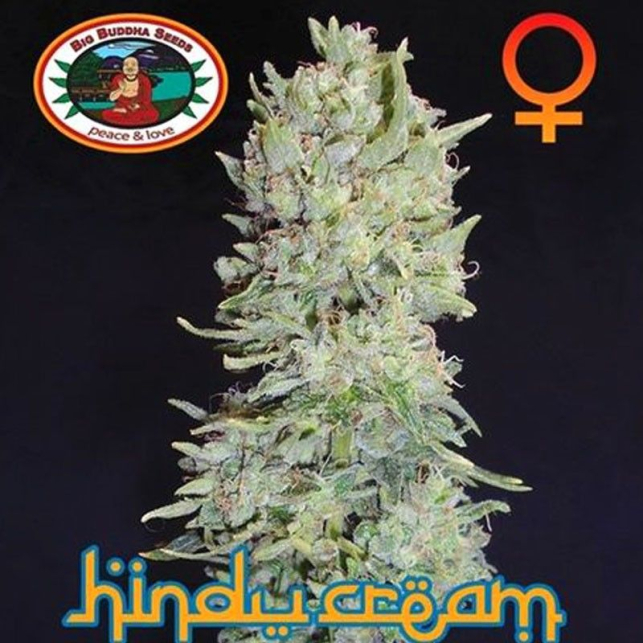 Now available at PevGrow, Hindu Cream by Big Buddha Seeds. In this case the prestigious seed bank brings us a new creation that has emerged from the genetic fusion between two proven seeds at European level for more than 3 lustrums, are Hindu Kush and Cheese.

It is a feminized hybrid seed of Indica predominance that grows like a compact shrub, with a dense branching and enjoys an ease of cultivation and adaptation to all types of situations that makes it a very versatile option.

What is the production of Hindu Cream?

Hindu Cream is a productive variety, which can give us up to 500 grams per m2 in interior cultures of buds of an exquisite quality, covered with a resin that gives it a spectacular view. This strain is a queen for the extraction of the best quality cannabic resin.

Which is the taste of Hindu Cream?

Its aroma is intense since it is cultivated, if you do it indoors you will have to get some powerful extractor because its aroma is strong. In the mouth its taste is sweet and its Hush touches will take back to the past the most experienced smokers and in combination with its aroma and that thick smoke.... I can not continue writing, I need a puff!

Which are the effects of Hindu Cream?

Its Indica character appears in full, it will relax you after that hard day, you and the sofa will be one and you will be totally new. They say that people who smile a lot is because they have a full and active sex life, partly because they lie, because Hindu Cream has a lot to do with the "Post" moment.

How is Hindu Cream grown?

Its flowering period is 56-70 days and as mentioned above is a variety that responds very well to all types of crops, whether you are indoors or outdoors enjoying the sun, Hindu Cream was born to be a reference of what a cannabis seed should be like. Responds well to both ScROG and SOG techniques.

Meet Hindu Cream with Pevgrow and take one of the most balanced seeds in the world.

New product
Opinions and doubts about Hindu Cream
Leave us your opinion or ask us any questions you have about this seed and participate in the draw!