Although, for the moment, the country Japan only allows its cultivation, as long as license you have, the fact is that the history of hemp is highly bound to this country and other neighboring East like China and Korea are.

And yet, Japan is one of the countries where there is less freedom when it comes to marijuana, although this could change before long, considering that if the current legislation is lightened, income also increase and, therefore, other problems would be solved.

History of marijuana in Japan

Experts in the field say that in the Japanese country consumed marijuana from the Neolithic, which already shows signs after several investigations of archaeological evidence to say that this product was used as food. In this regard, we should also mention that some historians insist on the idea that it was China who imported the custom in Japan.

Whatever the reality, the truth is that the evidence shows that, at least from the time mentioned, cannabis is present in Japan. In addition, the climate of this country makes much of it to be a place prone to natural growth of the plant, without that man has to step on it, or use chemical substances for a plant to develop normally Japanese ground.

In antiquity, well, you know that in Japan, as in China, especially marijuana is used for medicinal purposes. Among other uses it gave, include the following: treat asthma, skin problems, poisonous bites, as an aphrodisiac to increase the vigor of the man or, as a laxative.

One of the most interesting uses of marijuana is used to manufacture coins for the market in the feudal period as well as for making certain clothes or sandals. Of course, the threads of this plant were used for make its.

Of course, the monks have also used this plant to your meditations. Not surprisingly, hemp is a representative of purity and fertility as Shintoism.

Currently, marijuana is still consumed in Japan, but the fact is that much lesser extent than in Europe, which undoubtedly is related to the strict laws that the Japanese country has with respect to consumption of this plant.

As mentioned earlier in this post, marijuana use in this country is heavily punished. Yes you can grow, but with many restrictions and whenever you have a license. As far as consumption is concerned, this can be up to 7 years in prison. In fact, several examples, especially foreigners who are in the country, which have had to face different penalties for this. For this reason and contrary to what might happen in our country, marijuana use in Japan only occurs in homes and discreetly, never or very rarely see on the street.

Such is the prohibition that the Japanese themselves are not cultivating little product that is consumed in the country but are usually mainly Iranians are made ​​at stations selling marijuana and an exaggerated price, plus the product is not very good, not very reliable, given all the tricks that exist until it reaches the end consumer. 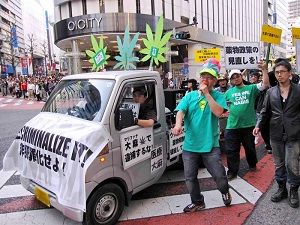 Despite all this, there may be a small hope that, as the journalist John Mitchel tells the newspaper, “The Japan Times”, the legalization of marijuana in that country could involve an investment of 30 billion to yennes year and thus help the country out of the difficult economic situation. You may soon be able to talk about it! If so, we would count it. Attentive!