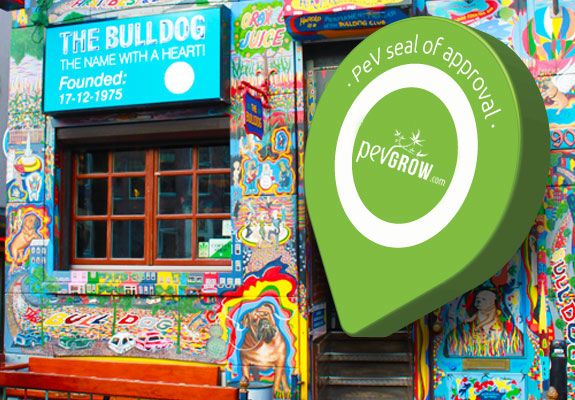 Red neighborhood and coffeeshop are two words that are united to Holland. Amsterdam, Netherlands’ capital, has been the epicenter of these establishments types, which are undoubtedly one of the tourist attractions in the country. Time ago the city came to host up to 1000 coffeeshop, but today only are about 200. We take a tour through some of the best, its history and we tell you some details that you have to keep in mind before visiting them.

Isn’t true that if I tell you Amsterdam the first thing that comes to mind is coffeeshop? Clear! Whether you like the world of marijuana or not, the coffeeshops in Amsterdam are one of the biggest tourist attractions in the capital of Netherlands, as well as the fame of the Red Light District.

Precisely it was next to this zone of the city where the first establishment of this type was opened in 1975.

Of course, Amsterdam is much more than its coffeeshops, in fact, it’s a town worth visiting for the beauty of its canals, the particularity of some of its neighborhoods and the pleasant atmosphere that is lived in its streets. But, we recognize, … we love everything that is about to do with their coffeeshops! I would miss more, wouldn’t me??

That is why, today we want to dedicate a space to these particular places in which to sell and to consume marijuana is allowed, something that contrasts with other prohibitions like the one of you aren’t being able to do it outside these spaces or that in them you can’t smoke tobacco (unless if there is an exclusive area for it) nor to sell alcohol, at most, you will be served, in some of them, a beer of low graduation.

I would like to tell you the history of the coffeeshop of Holland, which are the best in the capital of tulip country, as well as some particularities or curiosities that you have to know if you are thinking about travel to Holland. Will you join me??

What is a coffeeshop?

I don’t know if you’ve ever been at one or you’ve seen any photos, but, except for some, the coffeeshops in Amsterdam are usually quite private, especially for the decoration type. Otherwise, there are spaces, like the cafes you know, but the great difference is that there don’t sell alcohol as we said, you can’t smoke tobacco and, yes, of course, there sell and it’s allowed to consume marijuana, Yes, with some restrictions.

What should you know before entering in a coffeeshop in Holland?

First, you must be adult (18 years), in fact, in many or most of these bars you will be asked for the identity card. The amount of cannabis you are allowed to consume is 5 grams and, in fact, the establishment can’t have more than 500 grams in.

And if the fact that in that such pubs can lead to mistakes and think that the health of citizens and tourists isn’t safe, then police and health authorities are very strict in this regard.

So, in the official information websites of the city, whenever talk you about coffeeshop, caution is required, especially when you are going to consume other substances, such as hallucinogenic mushrooms, you are recommended to do it with someone else who wouldn’t do it.

In addition to alcoholic beverages (although, as we said, there are some exceptions), the so-called “hard drugs” can’t be sell or consumed. What you will find are coffee (in some, even free), teas, infusions or juices, mostly. The food isn’t also available in these places, although, of course, in some you can find small snacks or other food to remove the worms.

One thing that coffeeshop’s owners don’t like very much is tourists who are going to stroll around their establishment. And it’s the danger of being a tourist claim. So, if you get a recommendation guide from Amsterdam and its coffeeshop, don’t be surprised to be asked to, if you aren’t going to consume marijuana and other substances, ask for your drink and you will feel at ease. “Do not walk like a museum”, say some information pages. Curious the least!

Other prohibitions which can also call your attention is that there don’t let you use the mobile phone (at least in some of them, as you can read on the city’s information web sites) and yet there is Internet connection.

Street selling is forbidden and, among the rules, it’s also specified that violent attitudes are forbidden. Something that isn’t surprising considering that, during a long time, the brawls that were organized inside and outside of them occupied the covers of the main local and national newspapers.

As we said, neither food nor alcohol, but what can we find in the menu of one coffeeshop of Amsterdam?

Marijuana in different formats: marijuana in infusion, cakes or muffins of cannabis and, of course, you also have a very cool way to smoke marijuana too, with water pipes. Dare to try that experience!

Of course, you also have paper roll and everything you need to prepare your own joint, although in many coffeeshops you get the joint done. More comfortable, it’s impossible!

About the decor, as I said, it’s always quite private and themed. One of the most common is the Rastafarian, but there are also Buddhist, Irish, etc. decor. What do you think if I introduce you in someone of the best in the city?

Top 5 of the best coffeeshop in Amsterdam

Of the almost 1000 coffeeshop that had Amsterdam in its streets, today there are only about 200. Something that isn’t a surprise bearing in mind that the restrictions are more and more and the complaints of the neighbors were also increasing. But, quiet, it wouldn’t be difficult to find one if you walk over streets of the city.

But, of course, there are better and worse. We propose you to visit, in particular, five of the best coffeeshop in Amsterdam, the top 5, among which the first one was created in Amsterdam, The Bulldog, in 1974.

The Bulldog (Oudezijds Voorburgwal 90): mythical where there are, this is one of the places of worship for people who are in love with marijuana and its world. The first thing that will draw your attention of the place is its external decoration. Believe-me, you’ll see it right away! A curiosity: it spent 6 years to paint the entire facade, by the hand of Harold Thornton, better known as ‘The Kangaroo’.

Opened 40 years ago (something more than unthinkable in Spain nowadays), today it has 5 locations. All are great, but in the first of them you breathe part of Amsterdam’s history about coffeeshops.

The premises are divided into three floors, one of them the “videotheek” where several large televisions are connected throughout the day. Another plant has techno music which has one volume, by the way, quite high and in another you’ll find the menu of products in which, truthfully, price isn’t the cheapest, nor its catalog is the most extensive, but the few they have is of quality.

Boerejongens (Utrechtsestraat 21): Fleeing from the stereotyped view of Amsterdam’s coffeeshop as far as decoration is concerned, the three Boerejongens establishments (by the way, of premium quality) it is distinguished by the wide knowledge of the people who work in it, besides being properly dressed and for having a very neat decoration, with wooden floors and marble bar.

The atmosphere that is breathed in them is quite calm and pleasant, so it has become one of the places of reference for tourists, as well as for lovers of good marijuana products, because the quality of them is to be prized.

Baba (Warmoesstraat, 64): another one of the most demanding among tourists and locals is Baba. The first thing that strikes you is its Buddhist decoration, very well cared for, and with a very relaxed atmosphere.

Barney’s (Haarlemmerstraat 102) is also one of Amsterdam’s iconic coffeeshop, not only for its long history (opened in 1986) also for the quality of the product you can find there (in PevGrow, like you surely know, we also sell Barney’s cannabis seeds). Its catalog is very wide and some of what you can buy in its store has been awarded in different Cannabis cups.

It’s a very spacious place where, in addition to being attended by people who know a lot about marijuana’s world, you can have information on the Led screens that you will find at each one of the tables which are at establishment. It’s one of the coffeeshop of Amsterdam most recommended by tourists. This establishment is decorated in the Hindu style.

Green House Coffee Shop (Oudezijds Voorburgwal 191): The first thing that catches the eye of this establishment is to know that the seeds they sell have been awarded 38 times in the marijuana championships, something difficult to overcome, so PevGrow also has seeds from Green House CoffeeShop in Amsterdam.

It has a really nice decoration, just like the atmosphere. Unlike other places, in Green House CoffeeShop you can find an extensive menu of drinks and food, and your cannabis menu and the sale of merchandising products or wrapped or semi-mixed pores.

It’s a very pleasant place to enjoy it alone and especially with friends. It will not leave you indifferent!

As well as I told you before, only in Amsterdam there are around 200 coffeeshops and many are worth visiting, not only for their products or decoration, also for the particularity and history of each one of them and because touring them, you will also discover part of the history of cannabis in the capital of the Netherlands.

For this reason, I recommend that you do the cultural visit about marijuana, a tour of the best establishments and streets of the city, which will not leave you indifferent.

What are you going to get with it? Get to know by yourself the history of the coffeeshop in Amsterdam, its rules, curiosities, another anecdote you will love, as well as try, free, some of the best “sweets” in the city. Take a look and tell us!

And now it’s your turn

It has just been a short summary of everything related to Amsterdam’s coffeeshop history, rules and curiosities, but you may have more questions, stories or anecdotes to add to this article. Do you want to tell them? It will be a pleasure to read you!✍️