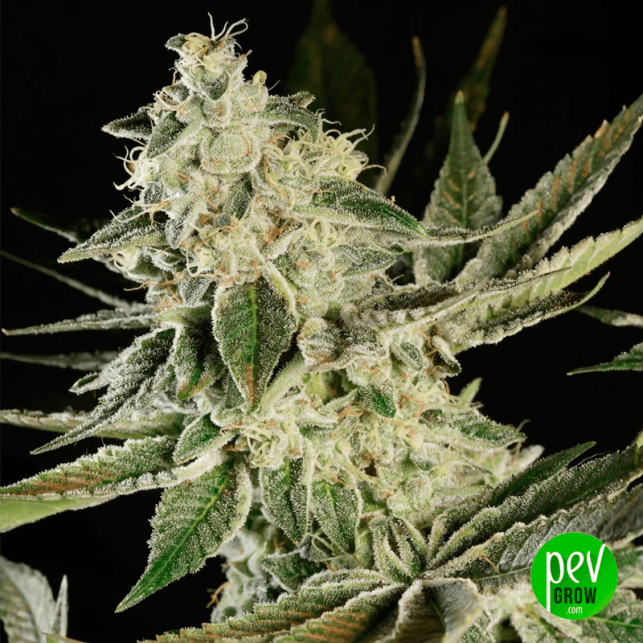 The Glowstarz feminized marijuana seeds from Paradise Seeds are the new cannabis gems that you have to know, since these plants shine with their own light thanks to the overwhelming amount of trichomes they produce. These seeds have a top notch pedigree that you need to know about, so I won't keep you any longer…

They are the result of the combination of 2 American elite clones that are present in many current polyhybrids due to their proven quality, OG Kush San Fernando Valley and Gelato 33 . Genetically it is very balanced and stable, as it contains approximately 60% indica and 40% sativa.

During the vegetative phase it develops with the growth pattern typical of the Kush, forming an open and branched structure, with a small number of leaves but they have wide, fan-shaped leaflets. Once they enter the flowering phase they stretch moderately at the same time that they start to put out inflorescences from all the buds, forming beautiful clusters of flowers that end up producing foxtail type buds, denser than those of Gelato. and more aromatic than those of the OG, with an amount of resin that you will not believe until you see it with your own eyes.

Due to its open architecture, its multiple branches, and their flexibility, in indoor cultivation it can be a great idea to apply the SCROG method to make the most of its morphology. If you choose this type of cultivation, it would suffice to put 9 plants/m2 in 11-litre pots, giving around 25 days of vegetative growth, and doing a first apical pruning on the fourth or fifth node, and a subsequent pruning on the secondary branches .

In outdoor crops, its versatility and adaptability are surprising, and according to Paradise Seeds, these seeds can be grown in multiple environments without problems, from the cold and rainy climates of northern Europe or America, to the mildest or temperate ones. Mediterranean or Southern California. Pruning is very useful to control its height, shape its morphology, or facilitate the entry of light to the internal and lower areas of the plants. If you want to achieve the highest possible yield, it is best to plant directly in the ground, but if you don't have the possibility, they also do very well in large pots, with a capacity of at least 50 liters.

Indoors they are usually harvested after about 8 weeks of flowering, and when grown outdoors they are harvested at early October in the northern hemisphere. In outdoor crops in the southern hemisphere these plants mature in early April. Keep in mind that it is not a 100% uniform variety, and as is the case with the vast majority of hybrids today, it may come out slower or faster depending on many variables.

How much do these seeds from Paradise Seeds produce?

They produce a lot, both buds and resin, and especially essential oils loaded with cannabinoids and terpenes. In well-configured indoor crops you can get about 17.6 oz per 3x3ft (500 grams/m2) without problems, and outdoors each Glowstarz can give you about  28,1 oz/plant (800 grams ) of dry buds.

You can expect a very intense aroma from the start of flowering, a mix of Diesel and pine similar to that of OG Kush. On the other hand, the flavor has a sweet and spicy touch reminiscent of the Gelato-Cookies part, maintaining the terpene power that the fuel background provides.

The combination of its high THC content, which normally exceeds 20%, and the indica influence of its genetics, result in a type of mixed effect that begins with a strong euphoria and stimulation, at the same time that the muscles relax to the point of practically no longer feeling them. It invites you to socialize, whet your appetite, and if you consume too much it makes you sleepy.

Now you can enjoy the most genuine American genetics of the last decade with these feminized seeds that combine the best virtues of the Kush lineage and the Cookies family, and The best thing is that Pevgrow sends them to your home in the shortest time and with the best quality/price ratio on the market.

You may also be interested in:
Opinions and doubts about Glowstarz
Leave us your opinion or ask us any questions you have about this seed and participate in the draw!