New manual Rosin Press by Secret Smoke, now you can use the weed you harvest to make your resin extractions with a good yield, with no solvents or toxic gases performing professional results.

The Rosin Hash technique is the most used by marijuana growers when they seek to enjoy the essence of their weed, its ecology and simplicity have quickly spread its fame throughout the world.

With this press you will be able to regulate the temperature of the plates which press the flowers or hash; You will just have to press the buttons on each digital screen.
Its hand-cranck serves to regulate the pressure, which if enough, you will see how the oil overflows with all the flavor and purity. If you need more security, this press has two holes to anchor it by its sides, so the press will be fixed, thus, you can do as much pressure as you want using the crank handle.

The yield you will get is around 15% in case of marijuana, and 80% if we use hash. The good news are that you don't need a minimum amount to do your homemade extraction as it occurs in other techniques like BHO or Jellyhash, in which is essential to have enough raw matter to get started.

Before starting, you must got Rosin paper and Rosin nylon filters, 120 microns for weed and 37 microns for hashish.
There's one thing to consider, when the weed is dry, the return is very poor, so I advise you to wet the marijuana a little bit to get a better yield.

How to use the Secret Smoke Rosin Manual Press in just 5 steps:

First: Clean the buds of leaves and twigs to make the extraction as clean as possible. The hashi can be placed directly.

Second: It's necessary to insert the material to be extracted into some Nylon Filters for Rosin, 120 microns in caso of buds, and of 40 microns for hash; These filters, in turn, are placed between the Rosin paper. A paper that has to be double sized that the plate (approx) and book- shaped, so it will collect the resin on both sides. Be carefull with the size of this paper, if it's too short you might spill the oil.

Third: The Rosin press is heated by pressing the On button. Each LED display belongs to a plate, and just pressing the SET button once you are able to modulate the temperature, degree by degree. After all tests we've done, I can recommend that the optimum temperature is 99ºC, and a good pressing time of about two minutes.

Fourth: It's time to place the paper between the plates and the filter with the marijuana in the filter paper, as central places as possible.

Then, you will have to squeeze as much as you can, the more pressure you transmit the more resin you will get. It's time to activate the reversing timer (button located between the screens) counting down the time; An audible beep will warn you when it reaches 0.
Fifth: You must see the extraction overflowing, now you have to separate the plates, and put the resin aside until it cools.
When it reaches the room temperature, it can be removed with a dabber, thus you put it in a silicone box.

Now, you may already enjoy the essence of marijuana in the most natural and ecological way, in 4 or 5 days the resin will reach the optimum point of strength being perfect to be consumed. 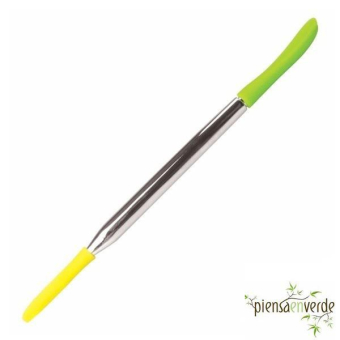 Nylon Filters for Rosin
$16.30
Opinions and doubts about Manual Rosin press with Hand-Crank
Leave us your opinion or ask us any questions you have about this seed and participate in the draw!