During the 70’s, the cultivation of cannabis with artificial light was developed. Since then, dozens of different types of lights have been tested, some with better results than others but, Which are the best lights for growing cannabis indoors? With this article you will find out….

Until a few years ago, HPS or high pressure sodium lamps were the undisputed queens in the indoor plant lighting category. But nowadays they have been surpassed, especially because of the LED technology that is constantly evolving, but also by other types of light such as CMH that are proving to be very efficient.

To better evaluate the different lights, we are going to make a comparison by price, consumption, heat emission, spectrum and durability.

It will probably still be the most widely used lighting in weed cultivation. They offer a number of lumens that are difficult to match, but their spectrum is not the most appropriate and that causes many to be wasted. In addition, the amount of heat they produce forces to keep them quite far away from the plants, and they consume more than other lights, so they are being displaced by other more modern lights.

Among the powers available in HPS kits, the 600W are the favorite in Europe, but in the USA the 1000W are the most used. The 400W and 250W are being used less and less, but there are still growers who light up their small crop with these kind of kits.

It has always been said that a good production with HPS is to get one gram for each watt consumed. We’ve seen with our own eyes to take out almost 1.3 g/w with a 600W lamp, so you can get more out of it. The durability of high-pressure sodium bulbs can be up to approximately 10,000 hours.

MH (Metal Halide) lighting was the most widespread for growth rooms and maintenance of mothers. Its whiter and bluer spectrum made it a better choice than HPS, which emits a more yellow/orange spectrum, within high intensity discharge lamps.

The negative aspects of MHs are the same as those of HPSs, high consumption, a lot of heat emitted and a good amount of wasted lumens. This technology was improved a few years ago with the incorporation of the CMHs, which are much more efficient.

Although it is not the best light for blooming cannabis, we have seen indoor autoflowering crops that performed very well with Metal Halide bulbs, probably because their ancestors’ Ruderalis genetics flourished at latitudes with a whiter natural light spectrum. Production with MH can reach almost g/w and its lifespan is extended to 10,000 hours.

Fluorescents are low energy bulbs especially for growing cannabis, which achieve a fuller spectrum than high-intensity lamps, emit much less heat and consume significantly less as well. The problem is that they are too low in power, which makes it not possible to obtain a high yield in the harvest when used for flowering.

On the other hand, to maintain mother plants, germinate, or illuminate during the first stages of plant life is very effective. By not producing much heat you can bring the focus much closer to the plants, and thus grow very compact, with little distance between knots.

A negative point of this kind of light is its short lifespan, ranging from 5,000 to 10,000 hours approximately.

The first cultivation LEDs were not very successful, they were expensive and did not yield enough, so they let many growers down. We all remember the 90W UFOs that were not good for flowering and growing the plants, a real disappointment.

Then came the LED panels containing 2W diodes and combinations of up to 16 colours, these worked a little better but they also had a lot of room for improvement. These lights were still very expensive when measured against the performance they offered, but they meant a switch from HPS to LED for many users.

Approximately 8 years ago, the COB LEDs were born. These devices incorporate a chip that makes the production of light more efficient. Thanks to this technology, the LED was placed at the top of the lights for indoor cannabis cultivation, as they offer the highest yield with the lowest consumption.

The newest technology is the Full Spectrum LED, which are panels that combine many colors and great intensity. They are very efficient and, in addition to achieving higher bud production, the resin content is greater and the level of THC and other cannabinoids is increased. With modern full-spectrum LED panels you can get up to 2 g/w and their lifespan is extended to 50,000 hours.

This technology is gaining ground day by day, as it combines a good spectrum of light with average heat consumption and emission. In terms of the power to performance ratio, they are much more efficient than high-intensity discharge lamps.

Nowadays they are offered in 2 different powers, 315W and 630W LEC, and another advantage is that apart from harvesting heavier buds, you will get more resin and cannabinoid level.

With LEC or CMH lights you can achieve an output of 1.5 g/w and the durability of these lamps can be up to 15,000 hours. 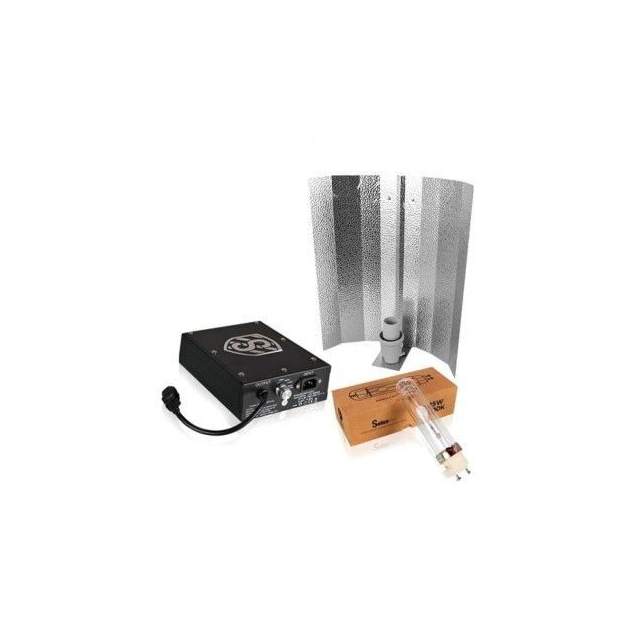 This marijuana growing lighting kit consumes only 315w (in superlumens 350w function). LEC bulbs are suitable for both the growth and flowering phases and only need to be changed every 4-5 crops…

🧐 Other types of artificial light for growing cannabis

In recent years, new technologies have appeared that have not yet been fully established in the market. This is the case of plasma or LEP, which was presented as a great alternative to sodium but finally has remained in a very minority sector. The high prices of the equipment greatly limited its distribution.

Induction lamps are another example. Expectations were set so high that, even if they don’t work badly, they haven’t become what they originally promised. As with plasma, their prices have a lot to do with not spreading more among home growers of cannabis.

Also of interest to you are:
– Saving on indoor marijuana growing
– Aeroponic: The most advanced hydroponic culture system
– My experience with LED lighting in my marijuana indoor crop
– 2020 Lunar calendar to grow marijuana

LED technology applied to cannabis cultivation is gradually overtaking high-intensity discharge lamps. Electricity prices, performance and the awareness we are learning about leaving a smaller carbon footprint on the planet are some of the reasons for this change.

What about you? Do you know of any better artificial light for growing cannabis plants indoors? If so, tell us, and if you liked this article please share it.