Substrate fly infestation in marijuana crops is not one of the worst, but it can lead to many problems. If the necessary measures are not taken harvest can be seriously diminished, so we thought about creating this article to help locate and fight these small insects.

▶ What is the substrate Black Fly ?

It is a species of mosquito similar to the common one, but smaller in size. Adults are winged, black and can be seen with the naked eye. The larvae have a white body and black head and represent an even greater danger than the adults.

Its real name is Sciridae, but it is known by many different names, soil fly, mulch fly, mushroom fly, moisture fly and others.

👾 How can you locate a substrate fly infestation ?

The best way to locate this and other pests affecting cannabis is to place yellow sticky traps near the plants. These colored strips contain hormones that attract these insects and act as a monitor to detect pests as soon as possible.

If you have not set sticky traps you may see flies flying around the crop directly, as the signs they leave on the plants are not visible at an early stage.

📱 Why does soil fly infestation appear in cannabis crops ?

This pest develops in humid environments and likes heat and darkness, so it usually reproduces under the outer layer of the substrate. These conditions are favorable for the appearance of fungi, so it is not surprising that Sciridae is the same variety of fly that affects magic fungi crops. Females usually lay about 200 eggs each time, which take about 3 days to hatch.

The larval stage lasts 3 weeks, after this time they form the cocoons where they will perform their metamorphosis from larva to adult fly. They then come to the surface, where they can fly and feed on decomposing material from the base of the plants.

🎬 What damage does the substrate fly do to marijuana plants ?

This insect leaves no trace of bites on the leaves as is the case with other pests such as the Trip or the Red Spider. As we said before, the greatest damage to plants is caused during the larval phase in the root system. These larvae feed on the capillary roots, preventing them from performing their task properly and, what is worse, causing injuries that can lead to the entry of fungi and other diseases.

🧐 How can I remove the substrate fly ?

Try moisture control first, the pest may have arisen from keeping the soil moist for too long. Then you can put a layer of vermiculite or diatomaceous earth as a mulch, this bothers them quite a lot. After that, you have to water with some product that contains Bacillus Thuringiensis, they are the same bacteria that we use to prevent the caterpillar. 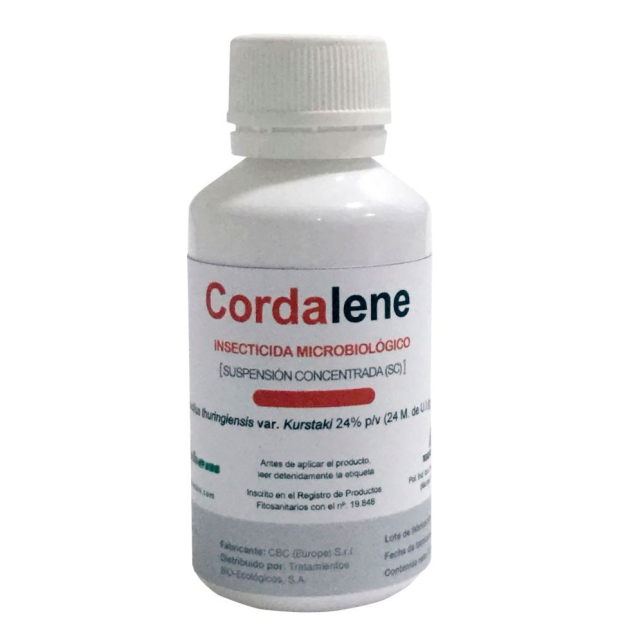 Cordalene is composed mainly of Bacillus Thurgiensis of the variety Kustraki, in only two applications prepare to finish with caterpillars, prays and also procesionaria as they die quickly by ingestion…

Dose and instructions for use Cordalene by Trabe
Add 2ml per litre of water.
Spray the leaves and stems of your plants.
Security period: 20 days until harvest.
Spray indoors before turning off the light, outdoors it is preferable at sunset.
Cordalene Composition from Trabe:
Bacillus Thuringiensis Kurstaki 24% w/v.

💻 Can you prevent the appearance of the soil fly ?

Of course you can do it, and it’s easy too. A quick way is to place a neem cake mould on the surface of the substrate. Neem oil sprays are also effective and, since it is a systemic insecticide, it will help us prevent the appearance of black flies and other cannabis pests.

Placing yellow and blue sticky traps helps to locate them and to keep them from spreading, and they are also useful to fight other pests, so it is highly recommended.

I recommend these others:
– The most common Fungi in Cannabis crops, how to prevent them
– Lack or excess calcium in the marijuana plant
– Excess or lack of potassium in marijuana
– How to make a washing roots and start over

Substrate fly is not a lethal pest, but it can cause many problems if we do not act quickly. At the slightest sign of their presence, we must take action. I hope that this article has helped you to get to know this little insect better, if so we thank you in advance if you share it.

Did you like the article, share it on social networks!
Alan Martínez Benito
CEO of Pev Grow, expert grower with more than 20 years of experience.
In constant struggle for the regulation of cannabis, mainly in the medicinal field.
See more posts
The phosphorus marijuana crops, deficiencies, excesses, and other problems →
Participate in the discussion