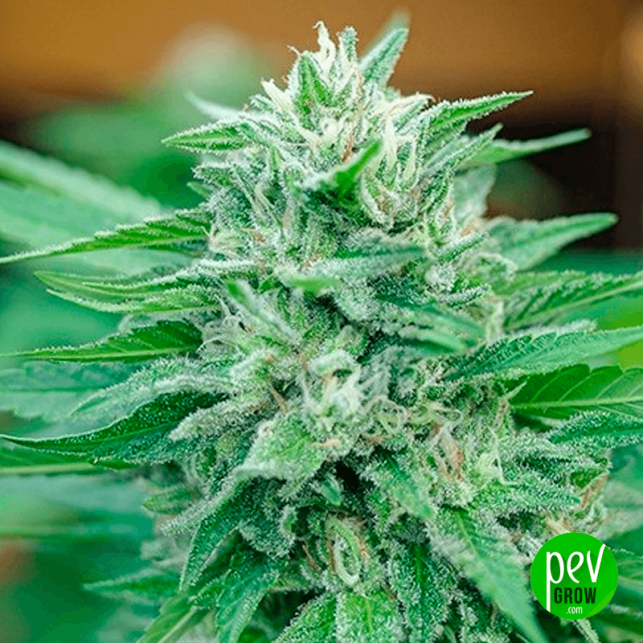 Moby Delicious are feminized marijuana seeds created by Delicious Seeds, a variety that stands out for its hybrid vigor, which gives it outstanding resistance, great growth speed, enormous bud production, and an effect not suitable for all audiences. .

What is the genetics of these seeds from Delicious Seeds?

It is a work based on the famous Moby Dick, which has been crossed with a Royal Moby to obtain feminized seeds that are as similar to this genetics as possible. Moby Dick is a cross between a Haze and White Widow hybrid, so it is a polyhybrid mainly sativa, although it does not flower very long and produces indica buds.

How is Moby Delicious morphologically speaking?

They are very robust plants, with resistant trunk and branches that in the first weeks of life maintain a compact morphology , but as it grows it stretches little by little. During pre-flowering and the first weeks of flowering, it can double or even triple its size, at the same time forming buds of an impressive caliber, hard as stones, and with a good layer of resin.

In indoor cultivation they perform very well by letting the plants grow naturally, thus ending up with a giant central bud and several super-productive satellite branches. 9 plants/m2 can be placed in 11 liter pots, giving 3 weeks of vegetative growth so that they can create a large plant mass before starting the flowering phase.

In outdoor crops you may not have seen such productive plants as Moby, especially in gardens with a high incidence of light. It is not necessary to germinate the seeds too early, as they grow very fast and planting in mid-spring is enough to harvest plants over 2 meters easily. A negative point of this genetics is its vulnerability to fungi, especially botrytis, which can destroy the largest buds if they are exposed to high humidity.

When are Moby Delicious normally harvested?

Its flowering period indoors oscillates between 9 and 10 weeks, and you can choose the moment of cutting depending on your personal tastes with respect to the type of effect, since less mature cuts are more psychoactive, and if the you let it over-ripen it becomes more narcotic and sedative. In outdoor crops, they are harvested at mid-October in the northern hemisphere, and in mid-April in the southern hemisphere.

How much do these seeds produce in normal crops?

It depends on the power of light, the skill of the grower, and above all on the parameters of the crop itself. As a general rule, in indoor cultivation you can easily get between 14,10 oz per 3x3ft and  17.6 oz per 3x3ft (400 and 500 grams/m2 ), and each outdoor plant can give you more than 35.3 oz/plant (1000 grams ) , especially those grown in mother soil and with many hours of direct sunlight each day.

How is the aroma and taste of Moby Delicious?

It is the typical aroma of Haze hybrids, with that incense base that mixes with citrus, spicy and woody tones. The smoke is very thick, the kind that fills the room where it is consumed and leaves a scent in the environment similar to that of ancient cathedrals. On the palate it has clear lemon nuances reminiscent of some flavored cleaning products, a very defined flavor that has millions of fans all over the planet.

Extremely powerful, despite not having the highest percentage of THC on the market, the entourage effect boosts psychoactivity to new limits, causing great euphoria and stimulation for a prolonged period of time. It must be said that it also has a relaxing descent, not as pronounced as others but very pleasant on a body level.

These plants are really complete in every sense, productive, powerful, resistant, and very tasty, hence the success that this prestigious genetics had over the years. of recent years. Order your seeds at Pevgrow and you will get the best quality/price ratio, and a service that you will not find in any other grow shop.

You may also be interested in:
Opinions and doubts about Moby Delicious
Leave us your opinion or ask us any questions you have about this seed and participate in the draw!