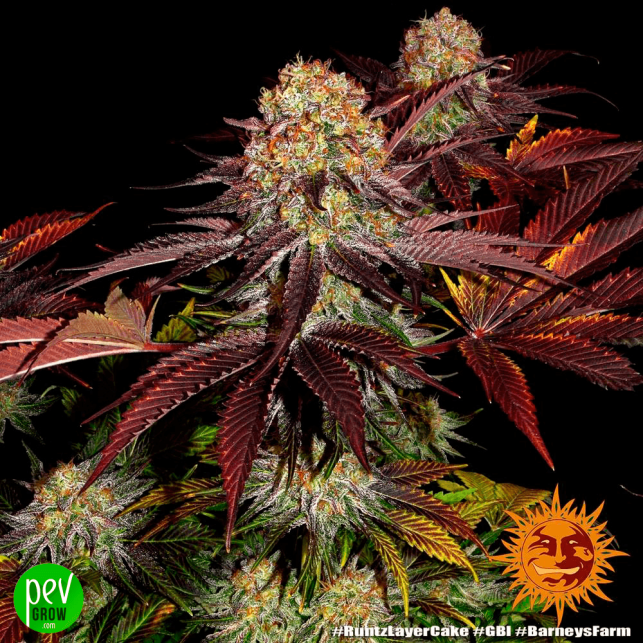 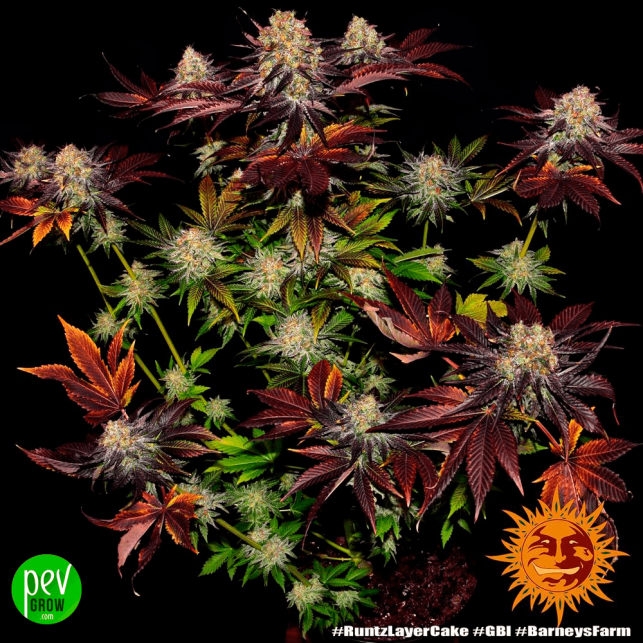 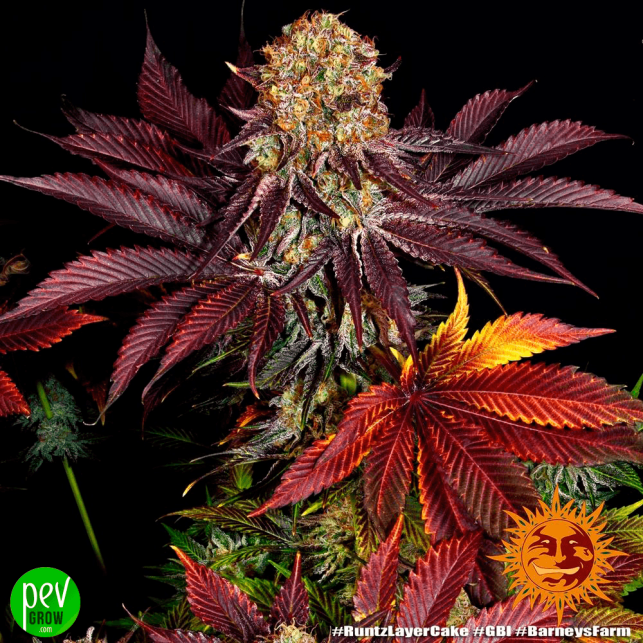 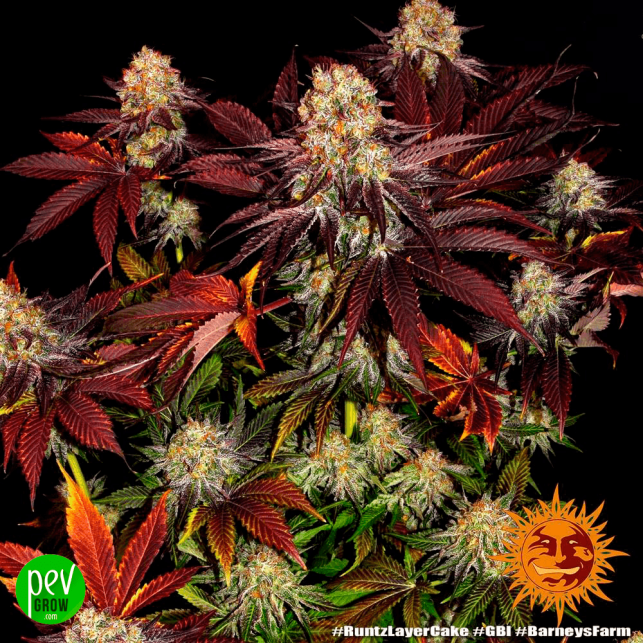 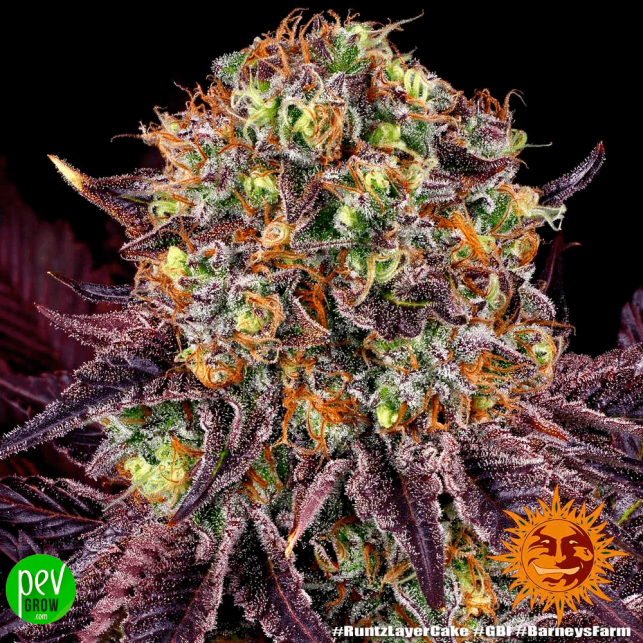 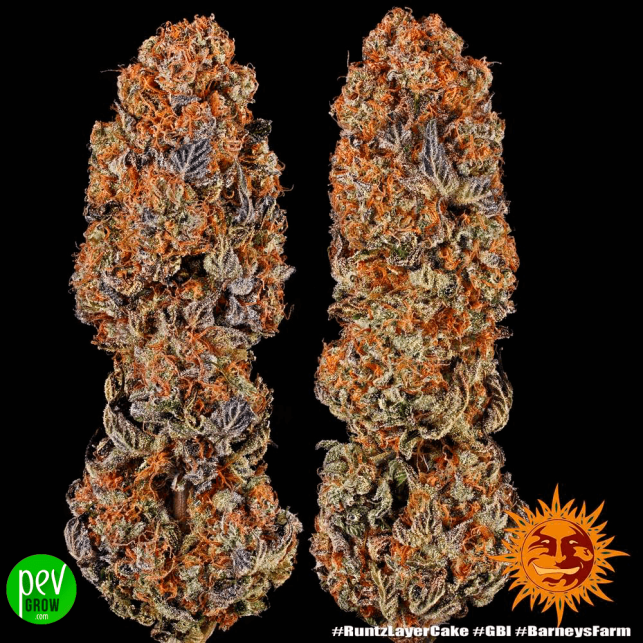 Runtz x Layer Cake are feminized marijuana seeds presented by Barney's Farm bank, and represent a cross between the most demanded variety of the moment and one of the most powerful of all time. If you haven't yet chosen the seeds for your next crop, I recommend you read this description carefully, because I'm sure it has the characteristics you're looking for.

Runtz contains Gelato and Zkittlez, and Layer Cake is made up of Wedding Cake and a cross between GMO and TK Skunk, so the resulting strain is a polyhybrid formulated from modern American genetics, with a strong representation of the Cookies lineage. Its chemotype is perfectly balanced between indica and sativa, since it has approximately 50% of each subspecies, and the best thing is that it shows a powerful hybrid vigor from the very germination phase of the seeds.

What is Runtz x Layer Cake like morphologically speaking?

Apparently it is more similar to indica varieties, with a very robust, solid, and quite columnar structure. If it is left to grow naturally, the branches do not develop too much, but if the main tip is pruned, it tends to branch more. The leaves are large, and it may be a good idea to remove some of the large ones during pre-flowering to increase the incidence of light and ventilation in some middle and lower parts of the plants. The buds of this plant are olive green during the first weeks of flowering, but as maturation arrives they acquire very showy dark colors. Take a look at the photos to see for yourself the amount of resin that Runtz x Layer Cake produces, which is not surprising because it descends from very resinous strains.

In indoor cultivation, the simplest thing is to place 9 plants/m2 in 11-litre pots, because in this way, giving 4 weeks of vegetative growth, it is possible to fill the entire space with large buds. Once the photoperiod is changed to flowering, it is recommended to do a light pruning of the low or Lollipop to remove all the plant mass that barely receives light, and at that very moment you can take advantage of it to do the defoliation that I told you about before. During the fattening and maturation phase of the buds, it is highly advisable to increase internal ventilation to avoid possible fungal infections, because these seeds end up forming very dense and poorly ventilated flowers.

In outdoor cultivation, the seeds can be germinated in early spring, these plants have such hybrid vigor that neither the rain nor the wind affects them during the vegetative phase. Outdoors it is more interesting to prune the main shoot to encourage branching and better distribute the production of buds. It is also a great idea to put stakes to be able to tie branches, because the buds are so heavy that they could break if they are not reinforced. As in vegetative growth, the rains do not affect it, once the buds are formed we cannot allow them to get wet, since we run the risk of fungi appearing.

It depends on the type of crop, indoors they need around 65 or 70 days of flowering, and outdoors they are harvested in mid-October in the northern hemisphere, and in mid-April in the southern hemisphere. It must be taken into account that these seeds represent a polyhybrid, so it is not surprising that earlier phenotypes appear and others that may need a few more days to finish their maturation.

How Much Do These Barney's Farm Seeds Produce?

They produce a lot, and the best thing is that you don't have to be an expert to achieve a true record performance. In indoor cultivation, a normal production can range between 600 and 650 grams/m2, and outdoors each plant can give up to 2.5 kilos. Also noteworthy is the incredible resin production of this plant, with glandular heads of 120 microns or more.

How is the aroma and taste of Runtz x Layer Cake?

The aroma is reminiscent of the tasty Zkittlez, with that characteristic and persistent touch of tropical fruit. The flavor, on the other hand, is more citric, sweet and earthy, a combination that has a mouthfeel that is very enjoyable due to the large number of notes and sub-notes that are discovered. If you let me give you another recommendation, I assure you that it is worth growing it with organic fertilizers to reinforce the powerful bouquet it has.

What kind of effect does this cannabis hide?

According to Barney's Farm, the analyzes of these plants have revealed a level of THC that reaches up to 27%, yes, you read correctly, and this is something that you have to take into account because it can be too powerful for consumers with low tolerance . The effect starts off being very euphoric, a cerebral high that changes your perception of things, until you notice how little by little your body seems heavier, not wanting to sleep but leaving you totally relaxed.

Lovers of USA genetics will be able to satisfy their desire to try the new aromas and flavors of the West Coast, and at Pevgrow we will be happy to send these seeds or the ones you need with the best quality/price ratio in the entire market.

You may also be interested in:
Opinions and doubts about Runtz x Layer Cake
Leave us your opinion or ask us any questions you have about this seed and participate in the draw!