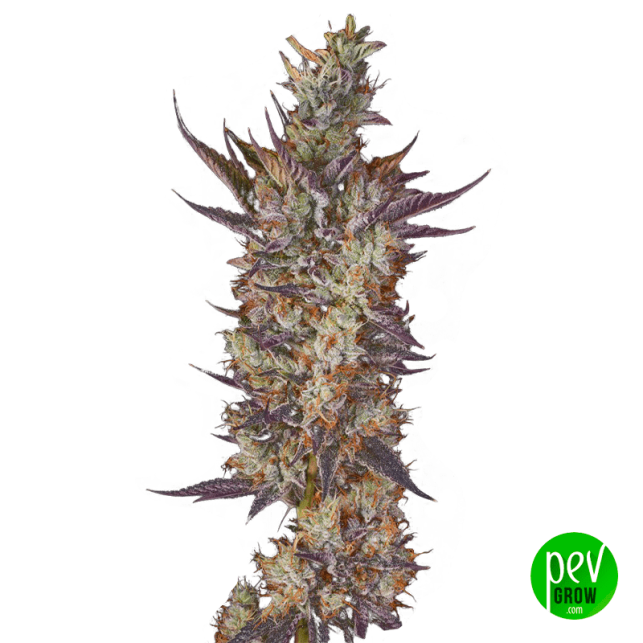 Buddha Gelato are feminized marijuana seeds created by the Buddha Seeds bank from one of the most popular genetics today. This variety combines an intense aroma and flavor with a full effect, all within a really short flowering period, and a contained size.

She is a direct descendant of one of the elite clones Gelato that are invading the entire planet thanks to her multiple desired qualities. This is a polyhybrid mainly indica, but also has some sativa characteristics as part of her effect and growing vigor.

During the first weeks of the vegetative growth phase it remains very compact, gathering many shoots in a small space, but with a very robust structure, thick trunk and branches, and large leaves. On the other hand, during pre-flowering and the first part of flowering stretches the distance between nodes enough to place the buds in that space, which at first are bright green, but as they get bigger they acquire golden tones and in some cases dark. The pistils are orange, creating a great contrast that gives the flowers a very appetizing appearance.

Thanks to their compact morphology, these seeds lend themselves very well to indoor cultivation, where up to 16 plants/m2 can be placed in 7-litre pots with 4 weeks of vegetative growth. From our point of view, they behave very well by letting the plants grow naturally, without pruning, so that they develop large central buds surrounded by very productive branches.

For its cultivation outdoors, it is more recommended to do pruning during the vegetative phase, first a apical pruning or FIM to the main tip, and some time later do the same with the secondary branches. In this way they acquire the shape of a hedge, which is very useful for achieving a better distribution of light and gaining internal ventilation. If you have the opportunity to transplant to mother earth it is the best, otherwise they can be put in pots of more than 30 liters so that they have enough space in the root zone.

When are Buddha Gelato harvested indoors and outdoors?

Its flowering period in indoor cultivation is approximately 8 or 9 weeks, depending on the phenotype and the taste of the consumer in terms of its effect. Outdoors or in outdoor greenhouses they are harvested at the end of September in the northern hemisphere, and at the end of March in the southern hemisphere.

How much do these Buddha Seeds produce?

According to the seed bank, Buddha Gelato in indoor cultivation can produce between 14,10 oz per 3x3ft  and 19.4 oz per 3x3ft (400 and 550 grams/m2), and outdoors each plant yields between  10,8  oz/plant and 70.5 oz/plant (300 and 2000 grams) dry. Another important factor is the spectacular amount of resin that it produces, a hallmark of the entire Cookies lineage.

How is the aroma and taste of Buddha Gelato?

The smell is sweet but not as pronounced as other similar strains, something that comes in handy during cultivation. On the other hand, once the yerba is cured, it exudes a very intoxicating menthol perfume, especially after grinding it in the grinder. The flavor is sweet and refreshing, a smoke that has a balsamic point and fills the mouth with nuances of nuts such as hazelnut.

Being a polyhybrid with a lot of indica but rich in THC, the effect is felt in body and mind in equal parts. Its psychoactivity is too high to put you to sleep, but it is more enjoyable in a quiet environment because it relaxes the muscles to a great extent.

If you are still wondering why Gelato genetics have changed the cannabis market all over the world, it is because you have not tried it, since this weed has nothing to do with the vast majority of hybrids today.

You may also be interested in:
Opinions and doubts about Buddha Gelato - Buddha Seeds
Leave us your opinion or ask us any questions you have about this seed and participate in the draw!