Today we are going to tell you in a simple way what are the most professional pruning techniques, one of the most important being apical pruning, and their repercussion on the final yield in cannabis plant, that is, how a good pruning technique can turn your plant into a huge cannabis bush full of resinous flowers.

Pruning techniques have been used by expert cannabis growers blessed with their “green finger” since time immemorial, as it provides great advantages, one of them is the limitation of plant size and its consequent acclimatization to indoor crops, improving the yield and quality of its resin.

The most commonly used technique is what regards to apical meristem cutting, or apical pruning, which consists of cutting immediately prior to the last knot in the main branch or stem of the plant. Growers do that to control the plant growth, spreading the branches across the breadth, being the most popular type of pruning among cannabis growers.

– Calendar 2018 for the outdoor marijuana growing in Europe

– Irrigation water as a key factor in indoor cultivation

✅ What is the apical pruning?

Apical pruning consists of cutting the tip of the plant just below the last knot. It should be done in a clean way, avoiding the plant suffers less stress (because the plants, although it might seem false, are able to suffer stressed as well). The cut can be made with any sharpened tool (it is best to use pruning shears), having to disinfect this stuff previously. 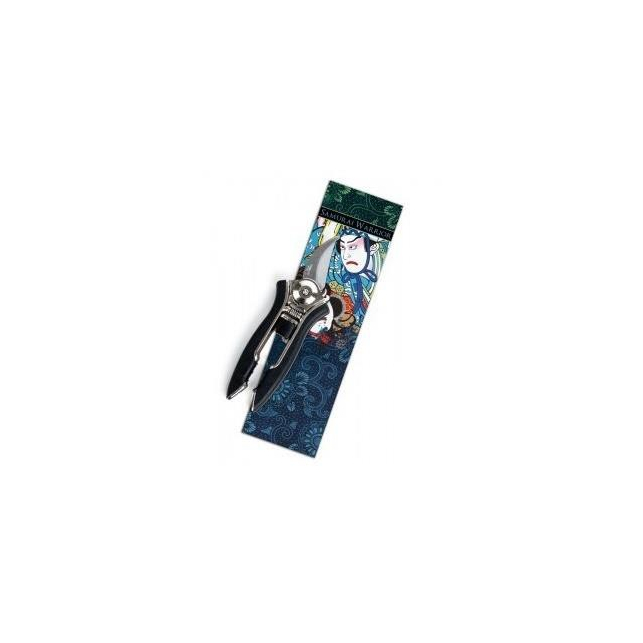 Features
For pruning in general.
Cut branches up to 2,54cm. of diameter.
Safety lock
Rubber moulded handle
Durable for continuous use
Sheets treated against the effect of resins and oils.

⭐ Why to perform apical Pruning?

This pruning is carried out in order to divide the growth energy of the plant into two main branches, expanding in the form of an inverted cone, giving rise to plants with shrub-like characteristics.

Auxine phytohormones, which we have already mentioned in other occasions, have the function, among many others, of inhibiting the fork in the main branch, which stops occurring as soon as we do the apical pruning. This is due to the fact that auxins stop their realease in the meristem already cut, allowing the stem to bifurcate.

In the case of very photoperiod-resistant sativa strains, this type of pruning can do well with the control obtained over the final height of the plant, as well as to advance the beginning of flowering even.

Therefore, all sativa lovers should be very aware of this….

…I know you’re there… what do you think? ? Have you practiced this technique with your Thai strains, for example?

FIM pruning ( a name that came from “Fuck, I missed”) is also apical, although the name may confuse you, it is exactly the same, the difference is that the FIM pruning takes advantage on the last knot for the plant to expand laterally. The hormonal impact is softer, so it is a less aggressive pruning than the purely apical, taking into account that we also eliminate less amount of plant mass. The cut is made on the young, newly formed leaves in this meristem.

? How to do the apical pruning?

Although in the market you have the right tools to perform pruning with total safety, an example of a suitable pruning stuff can be the Samurai Warrior Pruner which is designed with stainless steel blades and a comfortable non-slip rubber handle. It can cut branches up to 2.54 centimetres in diameter. It has also a safety lock and its rubber-moulded grip is durable and comfortable for continuous use.

On the other hand, the more branches the plant has, the more flowers it will develop in the new branches that are newly generated . Once we cut that top, or apical meristem, the plant will no longer grow in a straight line, starting to develop more branches in the area below the cut. We will have stronger branches and high quality buds. In addition, pruning the plant with this technique will help your crop to seize the light in the best way, as it will allow the plant to receive light more homogeneously than if we let it grow without prunning.

Pruning is always carried out at the stage of growth, taking advantage on the highest rate of auxins release in the stem, in order to provoke a hormonal “shock” of great impact on the production of leaves and branches in lateral way.

This can lead to a delay in flowering in most cases, but in return, a more than likely increased production of buds.

In indoor crops, pruning decisions are made based on the final height we want for our plants in our indoor, and the whole space we have, since we will end up with lower but wider plants. We will always make the pruning about 10 days before the change of photoperiod, observing first the growth of the new lateral branches and the global reaction in the plant, because sometimes we can notice a “pause” in its development. If this happens, we have to keep the growth photoperiod until we see that our plants recover their vigor, and the lateral branches have acquired a certain size to start flowering with guarantees.

Outdoors, the same, but playing with the natural photoperiod, so we will prune at the end of June, always taking into account the size of the plant. We recommend that the plant has between 80 and 100 cm height for a correct apical pruning in the outdoor crop without affecting negatively its development and beginning of flowering. Your plants won’t let you down!

If we take into account that we are talking about photo-dependent strains, do so because very rarely it makes sense to prune auto-flowering chemovars, although we have practiced the apical prunning in those type of genetics, we think that the simple growing method they provide, is better not to apply changes on it. An autoflowering marijuana seed is fast due to its Rudelaris genes, and we see no reason to alter its flowering cycle by pruning, otherwise, we may cause the appearance of male flowers (hermaphroditism) due to its hormonal delicacy.

We do not recommend apical pruning in flowering stage or in autoflowering strains.

It’s not necessary you obsess about the number of knots that the plant must have to be pruned either, because some genetics have shorter internodal distances defined by its genes, as may be the case of phenotypes Afghani or Kush. The plant size and its state of health are much more relevant.

Ah! And don’t forget to prune the old leaves in the lower part of the plant when they present chlorosis during flowering.

This process is normal, since especially at the end of flowering the plant needs a huge quantity of energy to biosynthesize our beloved cannabinoids and terpenes. That is why the leaves that present more than half of their vegetal mass in brown color should be prunned by their petiole, to a distance of its stem of approximately 2.5 cm.

How many can be done?

As a general rule, one prune per plant, always before to start flowering. It will be enough to achieve your objectives of plant height control, plant mass quantity and bud quality.

– Growing marijuana with the SCROG method

I hope these little advices have made you think about the importance of this technique in the cultivation of medicinal cannabis.

At PEV Grow we want everything you grow to be perfect, both indoors and outdoors, no matter what type of seeds you choose, since your tastes are also ours.

We hope you liked our post about apical pruning and don’t forget to share it and tell us about your growing experiences.

See you at the next post.✍️

Growing marijuana in cold climates? Yes, it is possible!

Get bigger and resinous buds naturally

How to grow a cannabis bonsai tree

Make your own homemade hydroponic system

How to remove the smell of marijuana in indoor growing