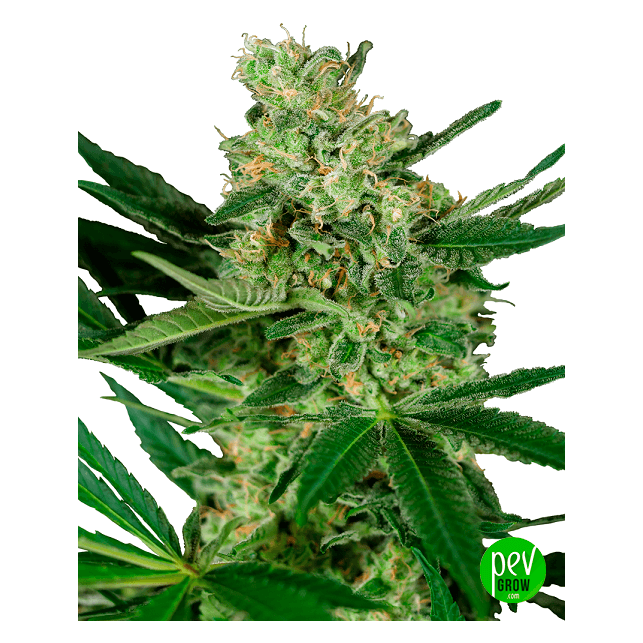 Pumpkin Spice feminized marijuana seeds by Sensi Seeds arose from the crossing of 2 of the American hybrids of the moment, and have earned their own right to be officially in the catalog of one of the best seed banks in the world. Take a look at the following description and discover all its qualities, which we are sure you will love.

What is the genetics of these Sensi Seeds seeds?

It is an original fusion between 2 very prestigious American sweet genetics, Sour Apple and Animal Cookies. Genetically it is very balanced, since it contains around 50% indica and 50% sativa, and Chemdawg genetics are very present among its ancestors.

Its appearance is reminiscent of Indicas, as it develops a compact, bushy, and very leafy structure. The distance between nodes is medium during the vegetative phase, but when it enters flowering it stretches a bit to fit its dense and rocky buds, which have a record number of trichomes, into that space. In indoor cultivation it does not usually grow more than 1 meter, and outdoors it usually grows between 1 and 2 meters tall.

Their cultivation does not present many difficulties, and thanks to their size they are perfect plants to apply the SOG method indoors, because they allow up to 16 plants/m2 in 7-litre pots. If you do it this way you have to know that it is enough to give about 25 days of vegetative growth, and it is not necessary to prune, it is better to let them grow as is because what we want is to get 16 giant buds. In some cases it is very interesting to do defoliation to remove some of the large leaves that can shade the buds in the middle part of the plants, but don't overdo it, remember that the solar panels are where the plants take the light.

In outdoor crops, the seeds can be germinated in early spring, especially if the intention is for the plants to become as large as possible. Just as indoors it is better to let the plants grow naturally, outdoors it is more interesting to prune the main tip and promote branching, because otherwise most of the bud production is concentrated in the crown, and it can be very risky in cases of rain or prolonged high humidity.

When are Pumpkin Spice harvested?

In indoor cultivation, they can be harvested after 9 or 10 weeks of flowering, depending on the phenotype, because plants can appear faster than others. When grown outdoors they are usually harvested in mid-October.

This depends on many factors, but as a general rule it can be said that indoors you can get a harvest of around 450 grams/m2, and outdoors each Pumpkin Spice produces around 550 grams dry. One of the best qualities of this strain is its ability to produce resin, and it is not surprising seeing the genetics that make it up.

How is the aroma and taste of Pumpkin Spice?

The aroma is kept under control until the final part of flowering, where it can become a problem if no means are put in place to control it. The earthy part stands out, but the most surprising are the fruity nuances that will make you think that you are eating a green apple, sweet and sour.

What kind of effect does this weed cause?

With just a few puffs you will begin to feel a tingle that runs through your back and reaches your brain, awakening a series of pleasant sensations led by a general improvement in mood, total well-being, and creativity that is very useful for artists of all kinds. On a bodily level, it gives you a feeling of peace and relaxation that is greatly enjoyed in free time, and can serve to facilitate peaceful sleep or calm muscle tension.

Genuine aroma, unique flavor, extreme potency… It has it all. Don't get squashed, order your Pumpkin Spice seeds now at Pevgrow and enjoy this new variety from Sensi Seeds with American genetics that is already making a name for itself among the best strains of the moment.

You may also be interested in:
Opinions and doubts about Pumpkin Spice
Leave us your opinion or ask us any questions you have about this seed and participate in the draw!