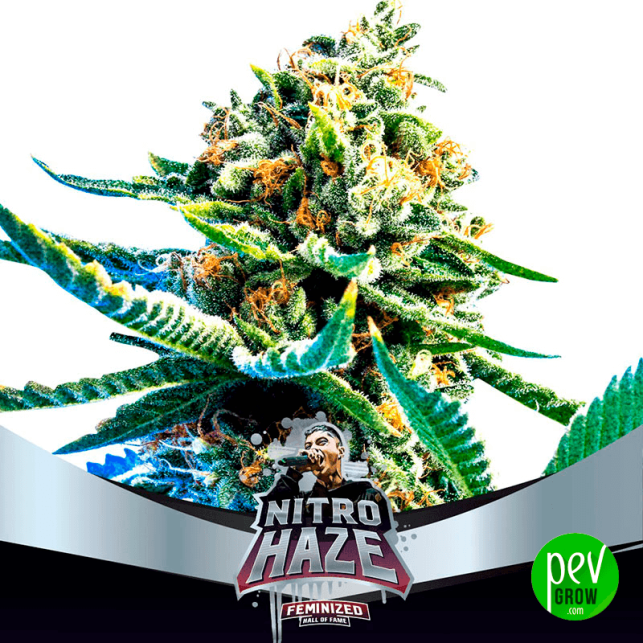 Nitro Haze by BSF Seeds are feminized marijuana seeds that combine the power of one of its most famous varieties with the medicinal properties of one of the most valued indicas in Europe. This seed bank has become one of the favorites of many growers, and seeing the quality of seeds like these, the truth is that it is not surprising.

BSF breeders chose their famous Lebron Haze as the genetic base for the production of this new variety, and as a pollen donor there could be no better candidate than the prestigious Black Domina , in this case a laureate with Valencian elite known as Black Domina '98 or “Barraquera”. The resulting genotype is around 60% sativa and 40% indica, but phenotypes that pull more towards one side or the other of the cannabis subspecies may appear.

It has undoubtedly inherited the vigour, resistance, and speed of growth that Haze hybrids like Lebron usually show, developing a large number of strong branches that grow close to the height of the central tip. During pre-flowering they can triple their height, and this is something that must be taken into account, especially in indoor cultivation. The buds have the density and hardness of Black Domina or Afghans in general, but they are elongated, with many inflorescences, and above all filled to the top with large resin. Some phenotypes can show violet or blue brushstrokes on calyxes and leaves, as long as they are exposed to low temperatures.

Thanks to the resistance acquired by these plants, their cultivation is quite simple even for users with little or no experience. Indoors you can choose 2 ways of growing, the most productive would be putting 9 plants/m2 in 11 liter pots, giving about 25 days of vegetative growth and pruning the main tip and the next higher branches. But if you prefer a simpler process, you can also put 16 plants/m2 in 7-litre pots, with 20 days of growth and without pruning.

In outdoor cultivation the Nitro Haze can grow too much when the conditions are right, so it is not necessary to germinate the seeds very soon. These plants love food, and can accept high doses of fertilizers, especially during flowering. Outdoors it is more interesting to prune the main tip , a higher yield is achieved and there is less risk of losing part of the harvest due to fungi. It is also recommended to apply preventive fungicides during the vegetative phase and pre-flowering periodically.

When are Nitro Hazes harvested?

Its average flowering cycle indoors is about 9 weeks, and the effect can change a lot if it is cut prematurely or if it is left to mature too much. Outdoors the harvest reaches early October in the northern hemisphere, and early April outdoors in the southern hemisphere.

They produce a lot in general, buds, resin, essential oils, everything... In indoor cultivation, a normal production can range between  ( 500 and 600 grams/m2) , and outdoors each Nitro Haze can easily yield between (500 and 700 grams ), even more.

How is the aroma and taste of Nitro Haze?

It is a citrus and Haze mixture that during cultivation releases a floral, lemon, and incense aroma, which after proper drying and curing tastes like a refreshing lemon meringue. The smoke is very dense and stuffy, and it smells for miles so you have to be careful.

It is stimulating and euphoric, especially during the first half hour. It speeds up thoughts a lot, expands the mind and is very inspiring, so it can be used very well for creative activities. It has a strong physical and relaxing low, and if consumed in excess can leave you glued to the couch for hours.

Hazes will never go out of style because it is very difficult to get plants as complete as in every way. Every year many hybrids with blood from this prestigious cannabis family appear on the scene and they are all good, especially if they descend from the delicious Lebron. Chemdawg
$5.85
Opinions and doubts about Nitro Haze BSF Seeds
Leave us your opinion or ask us any questions you have about this seed and participate in the draw!