Gorilla Glue #4 is the elite cannabis clone that has spread fastest worldwide. Since it won first prize in the Michigan and Los Angeles cups in 2014, it has not stopped conquering indoor crops, and is now found on all 5 continents. But is this weed so special? Actually it is, if you haven’t tried it you don’t know what you’re missing, and if you don’t know it yet I invite you to read these paragraphs below.

🔥 What variety is Gorilla Glue? How did it originate?

This strain, like other great discoveries, was created by chance, as its creator Joesy Whales, who died a few months ago (RIP), was not trying to make seeds in his crop, but due to an accident the Chem Sister ended up pollinating the Sour Dubb and Chocolate Diesel plants that were blooming.

Mr Whales wanted to discard those seeds, but his partner Marrdog wanted to give them a chance, so he decided to germinate them. Fortunately he was able to prove the genetic potential he had in his hands and he saved 4 phenotypes, among which was the Gorilla Glue#4.

It loves the sun and bears the heat fairly well, making it ideal for warm climates such as Southern California or the Mediterranean. However, it does not like the cold, much less the humidity, a factor that must be taken into account, especially in outdoor crops.

It shows great resistance to insect pests, much more than most varieties, and its morphology is reminiscent of the Indica ones, although its growth is more typical of sativas, with a lot of vertical growth and great development speed.

It can really be considered a fairly balanced polyhybrid, so we can say that it is 50% indica and 50% sativa approximately. If you look at its structure is more like an indica, with good-sized leaves, short distance between knots and a medium stretch in flowering. But if we consider the effect we can see how it is so cerebral and stimulating that it could not be considered a typical indica variety.

The vast majority of commercial cannabis seeds nowadays are like this, containing both indica and sativa genetic load. This is due to demand from the public, who usually prefer to enjoy a great psychoactive effect like sativas, but without waiting for the long flowering period, and with the yield and ease of cultivation of indica varieties.

Gorilla Glue#1 is another of the 4 phenotypes selected from the original seeds. Also known as Sister Glue, in its taste and aroma the pine is most remarkable, and from the point of view of some users is even more powerful than #4, of course the effect is more indica, so it feels more physical.

Gorilla Glue#2 is similar in resin level to its sisters, but the taste is somewhat fresher and sweeter, although less intense. On the surface the buds look whiter than those of the other phenotypes, and the effect is quite similar to GG#4.

📲 How to grow Gorilla Glue #4 indoors

The best way to optimize the performance in indoor cultivation with this strain is with the SCROG technique, since its large branching coupled with the growth rate that has made it perfect for applying this technique.

You can put 4 plants/3x3ft in 6.6 US gal (25 litre) pots, with all mix substrate if possible, and add root stimulator for the first 3 waterings. Once the plants have reached the fourth knot you can prune the tip, doing regular apical pruning or FIM. A week later you can do the next pruning, this time of the secondary branches, doing it until we have enough number of branches to be able to fill the mesh.

Once the net is covered, the photoperiod is changed to flowering, and it is not a bad idea to do a low pruning at this time, removing all the branches that have been left under the net to favor the ventilation. Try not to stress them during this cycle because the most negative point of this genetics is its propensity to hermaphroditism, especially in indoor cultivation. 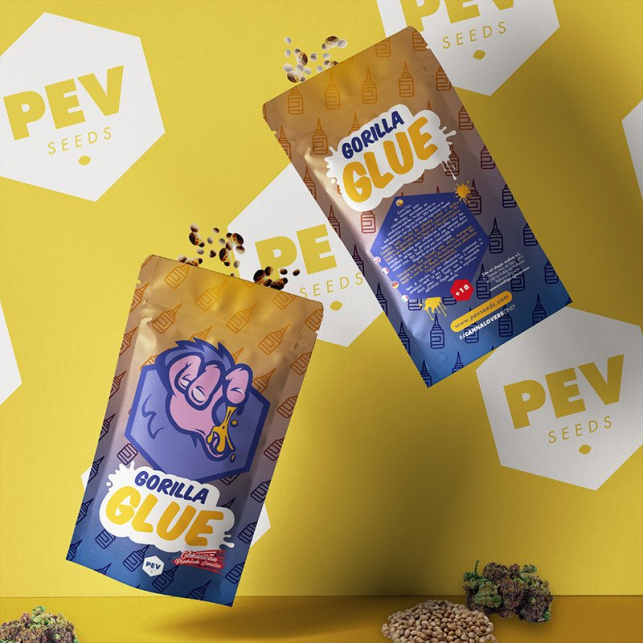 As long as it is not exposed to high humidity or low temperatures the Gorilla will develop without problems. It is best to prune a lot during the growing phase, so that the moisture does not do so much damage, as this way it does not concentrate the buds so much on the tips. A good idea is to place many stakes or some structure through which we can guide the branches and tie them up if necessary.

In outdoor cultivation behaves better than indoors, resistance to stress is greater, but it is still worth checking the buds from time to time in case a male flower appears that needs to be removed.

It is quite fast to flower and very early to mature. Indoors it is ready after about 60 days of flowering, and if you leave it longer the effect becomes more and more physical and heavy, remember this.

Outdoors it can be harvested from late September in the northern hemisphere, so it can be a good choice where autumns start with rain. In the southern hemisphere it is cut from the end of March.

It can be said that it is a very commercial plant, firstly because of the speed of growth and flowering, but also because of its good production of buds, which indoors can exceed 17.6 oz per 3x3ft (500 grams/m2). Outdoors each well cultivated Gorilla can give you more than 24.7 oz (700 grams) in dry, especially in very sunny and warm places.

But without a doubt what surprises people most about this variety is its incredible resin yield, it ends up totally bathed, with a very striking bright white appearance. The return on solvent extraction is over 25%, which is on a par with very few cannabis varieties.

👌 Aroma and flavor of the GG#4

You have to be careful with the aroma, you’ll love it but it can also cause you problems if you don’t control it, because the scent is very powerful, sweet and acid in equal parts, with a cocoa background inherited from the mythical Thai Chocolate.

The taste has notes of pine, earthy and acidic, typical of the Kush variety, but with a very special touch reminiscent of coffee, mocha or chocolate, with a great intensity that can almost be chewed.

It produces a great euphoria, it is the first thing you feel, positivity, motivation and general wellbeing. As the effect settles down it becomes more relaxing in all senses, so much so that if you smoke too much it becomes quite sedative.

On a medical level it is a very effective cannabis to relieve certain pain, muscle load, stress or insomnia, and the best thing is that it is difficult to become tolerant, so small doses are enough to benefit from its effects.

The THC of the Gorilla Glue can reach values close to 30%, but also enjoys a great entourage effect due to the terpenic profile it contains, so you have to be careful when consuming it if you do not want to be a victim of the Gorilla.

⛳ From Gorilla Glue to Original Glue

This strain is named for its extra-sticky resin, and everyone who touches it understands the reason perfectly. It is a name that everyone liked very much, as it was very catchy and represented the variety very well. But there were some people who did not like that name, the owners of the glue brand Gorilla Glue, and as they have it registered the name of the cannabis plant had to be changed to Original Glue or GG#4.

It is paradigmatic that the glue company was upset because they had used their brand for a weed and wanted to disassociate themselves so as not to give themselves bad publicity, and in the long run what has happened is that thanks to Glue cannabis now many more people know about these glues.

⭐ Seeds, hybrids and polyhybrids from the Gorilla Glue

Nowadays there are many seed banks from all over the world with their version of Gorilla Glue, seeds obtained through self-pollination of the elite cutting, or crosses with other varieties, there’s plenty of it, feminized, autoflowering and even Quick like the one from Dinafem.

Among all these variations, PEV Bank Seeds’ Gorilla Glue is the most outstanding as a feminized version, and the Platinum Gorilla, Grease Monkey or Purple Glue as great crosses, all of them of the highest quality.

✌ Weed not to be forgotten

The moment you try it, it will awaken all your senses and be forever engraved in your memory, which is what happens with premium quality products like Original Glue. Now that you know it, you need to get it, right? Well, you’ll realize that each and every one of the things you’ve read about it is true, and it will still surprise you…