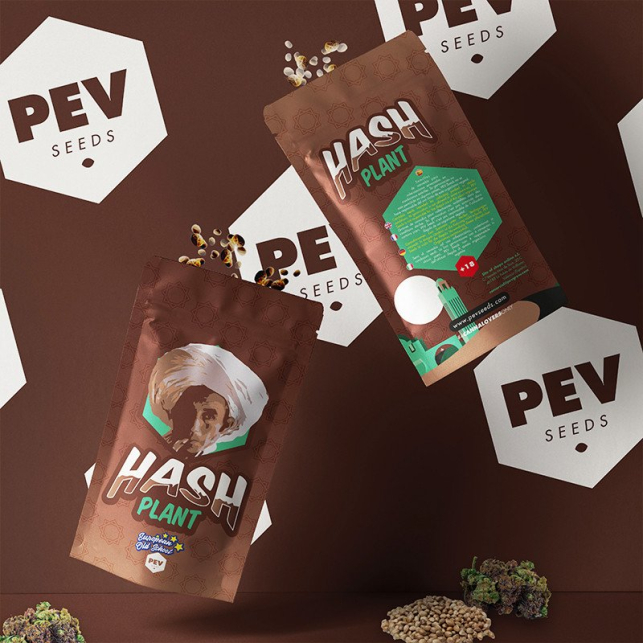 There are some cannabis genetics that seem to have always been there, classic names that are familiar to us. One of them is the Hashplant, but do you know where it comes from and the reason for its fame? Soon you will discover it...

It is a cannabis plant with a clear indica morphology, quite dense structure, compact growth, leaves of broad leaflets and dark green color, and a great strength in general. The flowers are medium in size, but with extraordinary hardness and an above-normal amount of resin.

It was precisely the feature of high resin production that marked this variety forever. Until that moment the concept "Hashplant" was reserved to Landraces and pure cultivars of Asia, where they use the plants for the extraction of hashish.

What is the genetics of Hash Plant?

It is presumed to come from a cross between a Thai and a Lebanese male, although its exact provenance is not known exactly. It came to Europe in the form of a clone during the 1980s, like many other strains that later became mythical.

In Europe it was offered in seed form first by Super Sativa Seed Club and later by Sinsemilla Seed Company, which later became Sensi Seeds. In Sensi they crossed the clone with their Northern Lights stallion to produce the commercial HashPlant seeds we know nowadays.

Hash Plant from PEV Seeds is the feminized version that comes from the original genetics offered by Sensi Seeds that was so successful all over Europe.

How is feminized Hash Plant cultivated?

Its cultivation is really simple, it can be a suitable strain for novice or inexperienced growers. It doesn't usually give problems, in general it behaves very similar to an Afghan genetics, so it can withstand certain levels of stress.

Due to its columnar morphology it is more recommended for the SOG method, putting many specimens per square meter, only with low pruning, to favor a greater development of the main tip.

In outdoor cultivation it may be interesting to prune the Hash Plant to get a structure where light penetrates better. An apical pruning after the fourth knot, and several prunings of secondary branches will encourage a better development of the lower branches, leaving a more appropriate form for outdoor cultivation, where the sun illuminates all parts of the plant.

In indoor cultivation it does not need more than 50 days of flowering to be completely ready to harvest, and added to its good production you can say that it is a very commercial variety.

It is a very early plant for flowering and ripening, so it may be very suitable for areas where autumn starts with rain. As a general rule you can harvest the Hash Plant in mid-September, before the official arrival of autumn.

You can play a bit with the time of maturation and harvest to define the effect as you like, if you prefer it to be very narcotic let it mature quite a bit, but if you like more an effect a little more cerebral I advise you to cut a bit earlier.

How much does Hash Plant produce indoors and outdoors?

The good thing about these marijuana seeds is that they will perform well in almost any situation, so it is recommended for beginners. It is clear that in the hands of an advanced grower it can produce better, but virtually anyone will get a good harvest of compact and resinous flowers.

In indoor cultivation illuminated with a 600w lamp you can get around 500 grams per square meter. Outdoors a single plant can easily give you 700 grams dry. The resin production is also remarkable, at the moment we have enough super resinous genetics, but when the Hashplant came out there were very few.

As its name suggests, this variety is very appropriate for quality cannabis extractions. Not only for the great return it will give you, also for its high profile of terpenes and flavonoids.

What is the flavor of the feminized Hash Plant variety?

It is a combination of musk and spices, with a spicy touch reminiscent of first class hashish. Puritans say it tastes like an old-school Indica, a very particular flavor that combines special nuances similar to those left in some extractions.

What is the effect of PEV's Hash Plant?

For us it's a perfect kind of effect to enjoy at night. It offers total relaxation, very noticeable at a muscular level, but also psychologically. It can be a highly recommended variety for people who depend on medicines to sleep, as it produces a very narcotic effect if harvested quite mature. It is also interesting for users with pain or muscle tension, as well as to reduce anxiety and stress.

Where can I buy Hashplant seeds?

If you are interested in buying feminized seeds of the Hashplant variety you are on the best website. Because at Pevgrow we have the best feminized version of this classic Indica with the best quality/price ratio on the market. In our grow shop we will give you all the help you need, both before the purchase and for its perfect cultivation. Where are you going to find something better? As you know, we are waiting for you...

You may also be interested in:
Hash Auto of PEV Bank Seeds 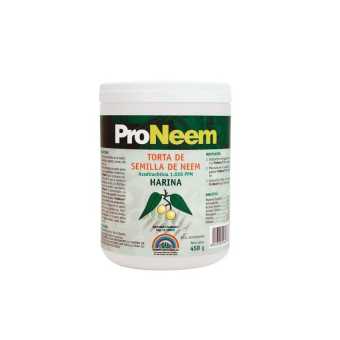 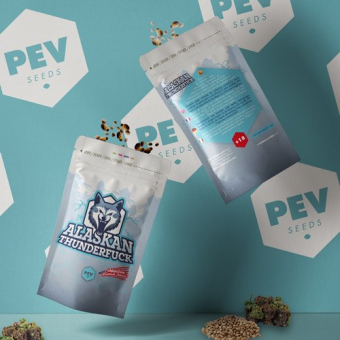 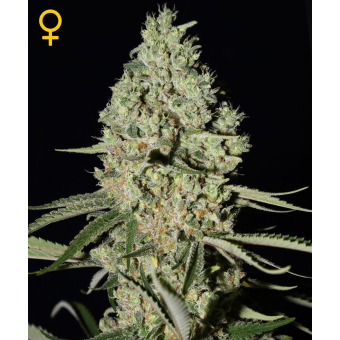 wishing everyone a smokin' merry christmas!

this plant grows small and compact,
the flowers gets extremely resinous as snow on a winter mountain that is fruity and sugary.
Dense buds, candies strawberry and sweet biscuits are in the air.
Charas and liquorice are also noticeable.

From a pack of 50, all sprouted. Veg growth was unreal - they actually got bigger than I wanted. Totem pole growth with few limbs. Amber tricombs in just over 70 days. Hard core frosty Indica that I have nicknamed Sominex. I'll definitely use this bank again.