Growshop » Blog » Marihuana medicinal » Terpenes: what they are and how they influence marijuana

The aromas of cannabis have the ability to transport you, motivate you or calm you down among other qualities. The power of aromatherapy can take you deep into the forest after smelling a Blueberry bud, with its earthy, mossy hints. Just as the scent of a Super Lemon Haze can brighten your day or erase your worries, this is mostly due to terpenes, which you may have heard of, but do you know what they are? 🤔 With this article you will get rid of doubts.

Terpenes are highly volatile aromatic oils produced in the same glands as cannabinoids. These compounds are formed by the union of hydrocarbons called isoprenes. The volatility of terpenes is defined by the amount of isoprene molecules, when 2 of these molecules are joined they are called monoterpenes, which are the smallest and most volatile. On the other hand, when 3 are joined they are called sesquiterpenes, and they are usually best kept in plants. These are the most common but there are more.

The ideal definition would be that terpenes are the molecules responsible for the aroma, taste and type of effect. The chemical distribution of these molecules is what will mark the organoleptic qualities of each variety of cannabis

🔥 How many types of terpenes are there?

There are 10 different kinds of terpenes and they are classified according to their chemical structure, based on the number of isoprenes contained in each group, I am going to show them to you below:

🎯 What role do Terpenes play in weed?

It is thought that marijuana plants began to generate terpenes as a way of adapting to the environment. Its main mission is to scare off predators and attract pollinating animals, as is the case with other plants. It has been proven that some terpenes such as limonene are useful as an insecticide, so we can be sure of their effectiveness in combating certain types of insects and herbivorous animals.

There are theories that claim that terpenes also help to withstand high temperatures, as they evaporate with the heat, creating air flows that reduce perspiration and cool the plant.

We will separate these compounds among the most common ones, found in most varieties of cannabis, and the secondary ones that usually appear in smaller proportion:

Most important terpenes of cannabis plants 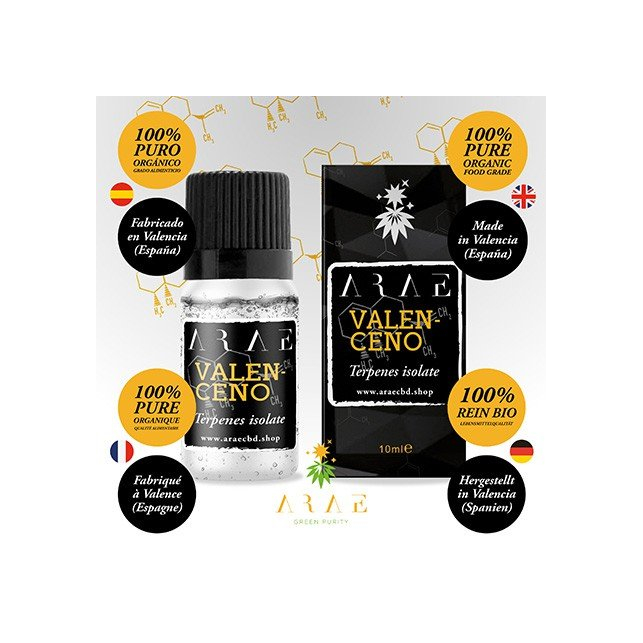 ARAE’s pure terpene Valencene is going to surprise you. You are about to buy a product which brings that different and special touch to your food, carbonated beverages, oils, creams, vaporizations… The list is incredible…

🎬 Do terpenes get you high?

They don’t usually produce psychoactivity by themselves, except for Eucalyptol which can be psychotropic when consumed in high concentrations, but they do have the capacity to modulate the effect caused by cannabinoids. There is even evidence that Caryophyllene activates the CB2 receptor or Thujene activates CB1.

In other plants, such as Salvia Divinorum, terpenes such as Salvinorina A. do produce a powerful psychoactivity, but in cannabis they usually only modify or enhance the psychoactive properties, what we know as the entourage effect.

⚠️ What is the entourage effect?

The synergy produced by the interaction between terpenes, cannabinoids and other chemicals in cannabis is called the entourage effect. This reaction was first described by Dr. Raphael Mechoulam in 1998, who also came up with the term.

The theory says that the therapeutic or psychotropic effect of each variety of cannabis depends on its chemical composition. This means that the beneficial properties of cannabis depend on the profile of cannabinoids, terpenes, flavonoids and other compounds contained in that strain.

When a gene contains a chemotype with high levels of CBD and is also rich in Mircene, its relaxing and anti-inflammatory effects are enhanced, this happens with OG Kush CBD, for example. On the opposite side we have the Super Lemon Haze, which combines high amounts of THC with a large percentage of Limonene, which has the ability to penetrate the hematoencephalic barrier, causing more THC to enter the bloodstream. These are 2 examples of how terpenes can enhance the medicinal and/or psychoactive properties of each variety of weed.

They are completely legal in every country, these compounds are present in most plant species, so it would be impossible to ban them. Although they are now getting a lot of attention, terpenes have always been used in food industry, cosmetics, cleaning products and many other sectors.

This may also be of interest to you:
– How to extract THC and all its uses
– How are feminized seeds made
– How to identify a contaminated mushroom crop
– 2020 Lunar calendar to grow marijuana

⛳ Are terpenes bad for you?

Not at all, on the contrary, as we have seen terpenes can be very beneficial for you. You’ve probably heard of aromatherapy, which is based exclusively on improving people’s health with the help of aromatic terpenes.

If you have not yet tasted the power of terpenes I invite you to visit our store, where you can find different types, both pure and terpenes from the most well-known cannabis varieties. And don’t forget to share this article, I’m sure some people might find it interesting.