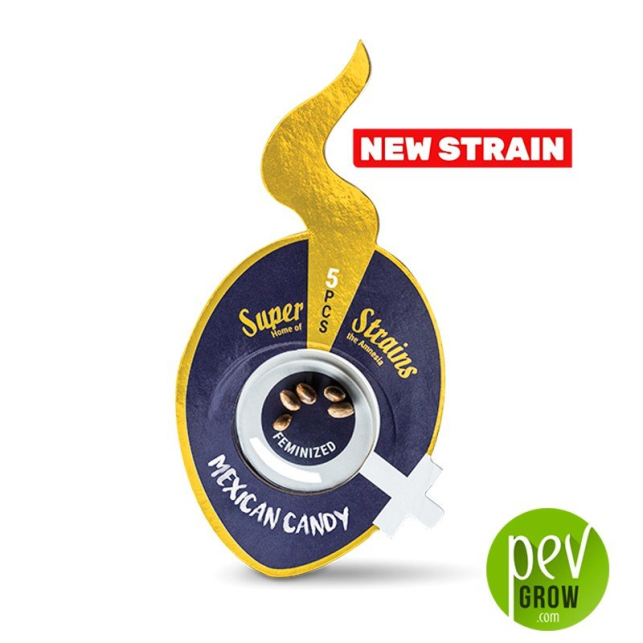 Welcome cannagrower! Newly arrived from Holland by Super Strains, it lands at PEV Grow Mexican Candy!. This cannabis variety stands out for its Mexican influence, although with a shorter flowering period than the traditional Mexican genetics, but inheriting all its personality.

What is the morphology of Mexican Candy?

Mexican Candy is a feminized variety, a perfectly balanced hybrid between Indica and Sativa, which structurally looks much more like an Indica with the typical form of Christmas fir, very elegant and with quite long branches at the bottom, which as they reach the top are getting shorter, so it needs some space between plants to avoid getting in the way.

What is the flavor of Mexican Candy?

When you smoke Mexican Candy, you taste a mix of flavors ranging from fruity touches with herbal notes and a very dense aroma, which flood the room. If you are like me and love to inhale well and fill your lungs to the top, you are going to hallucinate with Mexican Candy!

What is the effect of Mexican Candy?

Its effect is clear and open-minded, I usually smoke it when I meet with friends and we're going to have fun. Also, you can smoke it at any time of day without any problem.

How is Mexican Candy grown?

In indoor crops, the aroma given off by Mexican Candy is not exactly smooth, you'll have to install an anti-odor system so that neighbors don't stick their noses where they're not supposed to. The one that I personally recommend because of its quality-price ratio is the carbon filter, it has a durability of about 50,000 hours of cultivation, after which it will have to be replaced. With 9 litre pots, you can put 10 plants per m2, although this depends on the size of your wardrobe. Control its height by applying a SOG.

In outdoor crops, do not hold it back and let it develop its full potential, so the best option is to put it in a final pot of at least 60 liters, with a substrate of coconut fiber to promote proper oxygenation of the roots. In this sensitive phase, I like to apply Rhizotonic by Canna, which helps roots development and to better absorb all the nutrients you give them. One of the keys of the culture is to control pH of the irrigation water, so I use PH Min 56% from Plagron.

How much does Mexican Candy produce?

Indoors the productivity of Mexican Candy is excellent, 500 grams per m2, but outdoors is even better, being able to collect about 900 grams per plant.

Buy Mexican Candy, one of the new stars in Super Strains firmament!

You may also be interested in:
Opinions and doubts about Mexican Candy
Leave us your opinion or ask us any questions you have about this seed and participate in the draw!